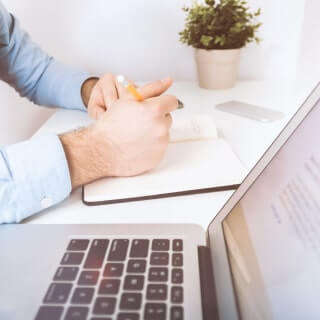 Mar 09, 2013
For such small things, punctuation marks can cause a whole lot of trouble. Most of us learn the basics of periods and commas along with question marks and exclamation points early in school, but as you continue writing you're likely to encounter situations where those basic rules lead to confusion. Below are four of those situations along with some guidelines that will help you remember how to handle these punctuation trouble spots next time you run into one.

Many punctuation problems come about not because the writer doesn't understand what to do, but because the rules themselves aren't clear. One example of this is the serial comma, a piece of punctuation that sometimes is an absolute must and sometimes can just be scrapped completely.
When we talk about sentence construction, a series is a list of items strung together in a row. For example, when I tell you I'm going to pick up apples, bread, and milk at the store, those foods are items in a series. As you can see, these items are separated by commas. Traditionally, every item in a series was followed by a comma except the last one, as in the example above. It's becoming more common, however, to leave out the comma that comes before the conjuncation, which is known as the serial or Oxford comma.
Leaving out the serial comma can sometimes lead to confusion. For example, if I say "I'm going to the zoo with my parent, Mary and Tom"it's not clear whether I am listing three items in a series (my parents, Mary, and Tom) or if I'm specifiying that my parents are named Mary and Tom.
Style guides like MLA, Chicago, and APA will specify whether you should use an serial comma or not. If you're writing in a style that leaves it out, you need to be aware of any problems that might cause and rewrite your sentences to ensure they're clear (i.e., the above example could be rewritten as "I'm going to the zoo with my parents as well as my friends Mary and Tom).

When punctuation marks collide it can create confusion for the writer, and nowhere is this more evident than at the end of quotes. Because a quote often ends with some mix of quotation marks, periods, question marks, and parenthesis, it can be hard to get everything in the right order. Here a few simple rules to help you out:

Both American and British English follow the same conventions for question marks and exclamation points: if the punctuation is part of the quote then it goes inside the quotation marks, but if it is part of the larger sentence then it goes outside.
Example
She asked, "Do you know the way to the store?" Alex exclaimed, "I can't believe you did that!"
Do you know what it means to "paint the town red"? I hate the phrase "stay calm"!
Notice that when the question mark or exclamation point is included in the quotation marks you don't need to add any other punctuation to end the sentence.

While they don't end sentences, other punctuation, including semicolons, colons, and dashes can also mix with quotation marks. These should always be placed out outside.
Example
She told Alex he "needed to get his act together"; he didn't seem like he cared.

Another punctuation mark that causes a lot of confusion is the hyphen, that little dash that joins together words (note that the hyphen is different from an -en or -em dash, which are longer dashes that join ranges and complete sentences, respectively). There are several writing situations that call for a hyphen, but the one most students struggle with is the compound modifier.
To understand compound modifiers, first you need to be clear about how regular adjectives work. Remember, when we want to modify a noun, we can list as many adjectives as we want in front of it, and we know that each adjective refers to the noun separately. When I say "My neighbor has a big, brown, hairy dog," you know that the dog is big and brown and hairy.
But sometimes when we're trying to modify a noun we need to combine two words to create the meaning we're looking for. If I want to say that a blanket won't catch on fire, we call it a fire-proof blanket. The hyphen is needed to let the reader know that the two adjectives are acting as one word: it's a blanket that's fire proof, not a blanket that's fire and proof. Another good example is the phrase "small state senator." If I mean the senator is small and from a state, then the phrase is left unhyphenated, but if I mean that he's from a small state, then it's "small-state senator."
As with many of the other items on this list, there are few hard and fast rules about when hyphens are needed. Generally, the only time they are absolutely required is when their use changes the meaning of the sentence, as in the small-state senator example. Many style manuals will allow you to go without the hyphen if it's a commonly used phrase or if it isn't necessary in order to understand the meaning of the sentence. When in doubt it's probably better to err on the side of caution and use the hyphen, but you always want to be sure that the compound adjective you create is needed and makes sense (again, see the senator example).
Also note that hyphens are only used to create compound modifiers when the modifier comes before the noun. When it comes after, the adjectives are left unhyphenated.
Example
The well-respected teacher did a good job with the lesson.
The teacher, who is well respected, did a good job with the lesson.
You should also be aware that compound modifiers that contain adverbs (words that modify verbs or adjectives that usually end in -ly) are not hyphenated.
Example
The individually wrapped snacks were perfect for road trips.

Thank you for the services. I did have to request for revision, and ask for sources review. Like ur free revision option, it guarantees that the instructions would be followed in the final paper.