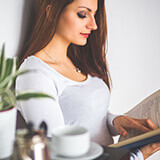 What's in A Verb?

Apr 04, 2013
Verbs are the busiest words in the English language. Every sentence has one, and they tell us what's happening or allow us to describe how something is. But if you look closely, you'll see that verbs are telling you a whole lot more than just what action is taking place. When we conjugate verbs, we pack a lot of information into those hard-working words.

All verbs in English start out as infinitives, which are just the basic forms of verbs that don't give the reader any more information than what the action is In English, infinitives start with the word to, for example, to walk, to be, to think, or to read. When we conjugate verbs, we change their spelling and add helping verbs so that the new verb phrase provides more information for the listener. When I change "I walk" to "I walked," you know now that the action happened in the past, since the suffix -ed is added to indicate the past tense.

What's in a verb?

Conjugating verbs doesn't just tell you about the tense; in fact, conjugation can tell you all sorts of things about the action of the sentence, like how many people are performing the action or if the speaker is giving you an order. These distinct classes of information are known as grammatical categories, and while every language is different, almost all languages have a way to encode the same main categories into their verbs.

We'll start with one of the parts of verb conjugation that we're all most likely to be familiar with. Tense is how we situate the action of a sentence in time; in other words, it tells us when something happened. There are lots of interesting ways that people have found to craft verbs around the idea of time, particularly when you have events happening relative to other events, but in English we always use the present moment as our reference point, meaning we break up events according to how they stand in relation to the moment in which we're speaking. In general, we can divide up our verbs into three categories: things happening at this moment (the present), things that happened before this moment (the past), and things that will happen after this moment (the future).
Of course, as anyone who's tried to learn a new language knows, when we're talking about tense it can quickly get more complicated than that. It's important to know, however, that a lot of the conjugations that we call "tense" in English don't actually fit the technical definition. Instead, when we talk about tenses like past perfect or future conditional, we're often actually talking about aspect and mood, which are two separate categories. In the strictest sense, tense refers only to describing whether an action happened in the past, present, or future.

Obviously, there is a lot more information we can learn about an action than just when it occurred. We might want to know whether something that happened in the past occurred just once or over and over again. Or, we might need to explain that an event started in the past and is continuing into the present. All those cases fall under the heading of aspect: the grammatical category that describes how verbs relate to the flow of time.
There are three main issues we can address using aspect. The first is whether an event happened just once, and thus was a single, bounded event, or whether the event was on-going with indefinite boundaries. Think of the action to walk. If I tell you "I walked to school," the sentence tells you that the walk was a single event that had a beginning and an end. But if I say "I was walking to school," then we know that the event was on-going and doesn't have a set beginning or end point. The second main issue is whether that event occurred just once or whether it was something that happened habitually. The sentence "I walked to school" suggests one particular event, while the sentence "I used to walk to school" tells the reader that I walked to school over and over again. In English, these distinctions are made using simple (a single, bounded event) and the continuous (an unbounded action) verb conjugations.
The last issue included in aspect is the position of events relative to a time of reference. For example, aspect can describe events that occurred in the past but are still relevant to the present. If I say "I had walked to school already when it closed because of the snow," the construction "had walked" tells you that that event occurred prior to the present, but is still important to the present-day action. In English, the past and future perfect are examples of this type of aspect.

You can also use conjugations of verbs and verb phrases to show how you feel about what you're saying. Are you expressing doubt? Stating a fact? Asking a question? All those different attitudes are called modalities, and the category that describes them is called mood.
In English, there are four main moods that we all commonly use:
There are several English "tenses" that include mood. For example, the conditional tense expresses the subjunctive mood and tells the listener that the speaker isn't sure about whether a particular event will happen.

Person is usually one of the first grammatical categories that students learn. Way back in elementary school, you were probably taught the difference between I, me, and you. This distinction is what's called person-when we conjugate verbs, those conjugations tell the listener who is performing the action. The three categories of person are labeled first person (I, me, we), second person (you), and third person (he, she, it, they). In English, verbs are conjugated to match the subject of the verb (I walk, he walks).
Notice that in the descriptions for first, second, and third person, we have a mix of singular and plural pronouns (remember, pronouns are a set of words that replace nouns in a sentence). This distinction is what's called number, which describes whether one or more than one object is performing the action of the verb. In the sentence, "They will be here soon," the pronoun they indicates that I'm talking about one person. If I said "He will be here soon," then the listener knows I'm only talking about one person. When we conjugate verbs for person, we include information about number.

The term gender might make you think of pronouns like he or she, but when we're talking about grammatical categories gender actually refers to the classification of nouns. Modern English does not have gendered nouns, but if you know anything about languages like Spanish or French then the concept should sound familiar. In those languages, and many others, nouns are categorized as masculine or feminine, and verbs have to be conjugated accordingly. In English though, all of our nouns are neutral, which means we don't have to worry about gender when we conjugate verbs.

I'm a sceptic in life and I'm not the one who is used to take risks. But this time I had to take risk and intrust my paper's destiny in your hands. Well... I've got B. Though it's not exactly what I have expected, I'm satisfied. I think I might  use your services again. Thank you.