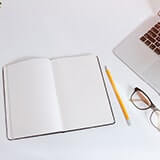 Jan 28, 2013
In Part I we went over the three basic tenses, but now things are going to get more complicated. These tenses describe events that occur in a particular sequence or that overlap in the past or the future. There are dozens of tenses describing all sorts of scenarios, but we're going to focus a few of the most common.
Note: You can refer back to Part I for definitions and help with the timeline diagrams.

The continuous present is used to show that an action is taking place over a period of time that includes this exact moment. It's formed by adding am/is/are to the present participle.

The continuous future tense is used to describe a continuous action that will be happening in the future and that will be interrupted by another event in the shorter future. It's formed by adding will be to the present participle. When I say "I will be eating dinner when the show starts," there are two events both happening in the future. Eating dinner, which is in the continuous future, is an ongoing event that will continue after the show starts. Note that the event in the short future is conjugated in the present tense.

Simple past perfect describes an event that happened later in the past than another event. It's formed by adding had to the past participle of the verb. For example, if I say "The store had closed by the time I got there," I'm describing two events that both occurred in the past, but the action in the past perfect occurred further back in the past.

The continuous past perfect describes an action that started in the past and which continued up until a point in the more recent past. It's formed by adding had been to the present participle.

The name of the present perfect is somewhat confusing because it's actually used to describe events that occurred sometime in the recent past. It's used when the event happened recently, although it's not clear exactly when (so you'd never use it with word that convey an exact time such as yesterday or last week). The present perfect is formed by adding have/has to the past participle.

The continuous form of the present perfect is formed by adding have/has been to the present participle. It's used to discuss actions that started in the past and have continued into the present.

In addition to these twelve, there are several other verb phrases that are used to indicate when an event took place. The following examples are constructed slightly differently than the main tenses, and also have more subtle meanings.

Adding the phrase used to to the infinitive form of a verb indicates that an action was performed continuously or repeatedly in the past but is no longer performed in the present. For example, in the sentence "I used to drive to work, but now I take the bus," the action drive to work was done in the past, but is no longer done in the present. While the simple past can also be used to discuss actions that were repeated in the past, the phrase used to is preferred when you want to show a pattern of individual actions or something that was done repeatedly. It shouldn't be confused with the continuous past, which is used to indicate a continuous past action that was interrupted.
The construction can also be used to discuss facts or generalizations that are no longer true, for example, "New York used to be my favorite city."

The phrase would always works similarly to used to when added to the infinitive. It indicates an action that was repeated frequently in the past, but now no longer occurs. It has the connotation that the action was extreme, annoying, or amusing. For example, if I say "You would always ask to stop for breakfast no matter how late we were," the verb construction implies that you used to always ask to stop and that I found it annoying or silly.

The phrase are going to is used to show that you intend to perform an action in the future when it's combined with an infinitive. When I say "We are going to eat dessert after dinner," I'm indicating that I plan to perform an action (eating dessert) at some point in the future. This construction is only used to describe an action you intend to complete, not to describe something that may or may not happen.
back to all posts
RECENT POST