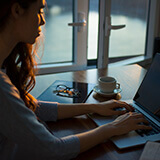 The Writer's Guide to Tense, Pt. I

On the surface, the idea of tense seems pretty simple: by changing the spelling of a verb or by adding helping verbs, you can describe the time period in which an event is taking place. When you dig a little deeper, though, tense becomes much more complicated. For instance, how do you indicate ongoing action that occurs in the past and the present? Or how do you describe several events that will happen at different times in the future? Every language answers these questions a little bit differently, so if you're going to be writing in English you need to know these specific rules.

In English, we generally recognize three categories of time: the present (what's happening right now), the past (what's happened before right now), and the future (what will happen after right now). Notice that these three definitions are all oriented around a central point. We pick a moment in time (the present) and define everything that happens as being either before or after this point. This is what's known as an absolute tense: we are always defining an event in relation to the moment in which we're talking about it.
It addition to defining an event relative to the present moment, we can also use tense to describe when events happen in relation to one another. For example, we can indicate that of two events that happened in the past, one occurred more recently than the other or we can show that of two events in the future, one will occur first. Keep in mind that when we do this, we're still defining all our events by their relationship to the present.

When we conjugate English verbs, we have to consider whether the action is a discrete event or whether it's an ongoing action. Simple tenses describe events that have a clear beginning and end; actions that occur over an undefined time period or are ongoing are described in the continuous tense (sometimes called the progressive tense). For example, in the sentence "I was running when my sister called me," was running is a continuous verb and called is a simple verb.

When we use verbs, we have to indicate not only when events happened, but also when they occur in relation to other events and whether the action is simple or continuous. This is accomplished by conjugation: changing the spelling of verbs and adding helping verbs. (In English, only the past and present tense are indicated by spelling alone; all the other tenses require helping verbs).
Note: Most English verbs follow the same conjugation patterns, but there are also lots of verbs that have irregular spellings. There are too many to list here, so the rules below will just address regular verbs and a few special cases.

An unconjugated verb, that is a verb that doesn't indicate person or tense, is called an infinitive. In English, these have the form to + verb, for example, to jump, to think, or to drop.

Verbs that are used alongside the primary verb to give more information about when the action is taking place.

The past participle is used to make perfect tenses. It's formed by adding -ed to then end of a verb (climbed, finished).

The present participle is the form of verb used to indicate continuous action. It's formed by adding -ing to a verb (eating, sleeping).

Perfect tense describes actions that have been completed.

Below are twelve of the most commonly used verb tenses. In the charts you'll see example of how to conjugate verbs for first (I, me, we), second (you), and third (he, they, it) person. There's also a timeline that will help you visualize the time frame that each tense describes.

The simple present describes discrete actions taking place in the present. It's formed by dropping the to from the infinitive. In the 3rd person singular an s is added.

To indicate something happened in the past, the suffix -ed is added to the end of the verb. Many words have irregular spellings for the past tense, for example swim (past tense swam), drink (past tense drank), and fly (past tense flew). The past tense does not tell you anything about how far back into the past an event occurred, only that it happened before the present time.

The future simple tense is formed replacing to in the infinitive with the helping verb will or by adding the phrase am/is/are going to the infinitive. Often they can be used interchangeably, but they do have slightly different meanings. Will is used to indicate that the subject plans to perform a voluntary action in the future or is making a promise, for example, "I will have dinner ready by seven." The phrase am/is/are going to is used to show that speaker has a plan: "I'm going to have a glass of wine when I get home." Again, this tense doesn't tell you anything about how far into the future something will happen, only that it will be after the present moment.
back to all posts
RECENT POST

Communication is great! I love all your features that ease the process. Your team must have spent a lot of time to make it work perfectly and it was worth it)