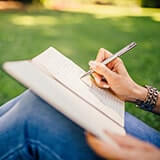 Feb 21, 2013
After years spent learning to master academic writing assignments, the first creative writing project can be a rough transition for many students. Instead of having to do tons of research and work within a highly-regulated format, you get to do pretty much whatever you want. Have you always wanted to write about aliens or pirates? Here's your chance! But all that freedom can lead to a lot of confusion and also a lot of poor storytelling. Short stories might seem more easy-going than a traditional writing assignment, but in fact there is an art to crafting a story that's both easy to read and entertaining.

Most short stories top out at around 10,000 words (that's about twenty, single-spaced pages), but often for writing classes your stories will be a lot shorter. Now, when you're struggling with the writing process those handful of pages might seem never ending, but when you compare a short story to a novel, it's really not a lot of space to work with. That's why the first rule of writing a short story is to keep it simple. Choose only a few characters and only a few settings, and keep your plot relatively straightforward so that you can use the short length you have to develop a strong story. When you jam in lots of characters and plot twists, your reader will likely be confused or won't care about what's happening, but if you spend time on just a few characters, you'll be creating people that the audience can invest in. Short stories, especially when you're just starting out, are about telling a small story well.

2. Don't cover too much time

Just like you don't have the space in a short story to build twenty complete characters, you also won't have the space to cover long periods of time. If you try to cram the tale of somebody's entire life into ten or twenty pages, it will feel superficial and rushed. You'll be so busy painting a broad picture that you won't be able to get into the details that make a character or plot interesting. So, choose a narrow time period in which to place your story so that you can put in the detail that good fiction needs. When you try covering just a few days or a single event in the lives of your characters, you'll find that your story develops a lot more depth.

The rules we all learned for mapping out the action of plays and novels applies to short stories as well. There should be exposition (where the characters and setting are introduced), rising action (where the conflict begins), the climax (where the conflict reaches its peak), and the resolution (where the conflict is resolved and the story concludes). It can be tempting when you start writing to try and subvert this formula or to play around with the structure of your story, but before you can pull off any fancy tricks you need to master the basics. The four main elements listed above should be included in your work, and only when you're able to do them well should you start messing around with this time-honored format.

Everything about storytelling is compressed in a short story, which means every single word you put down on the page should be doing a lot of work. When you're describing characters and settings, choose words that are absolutely necessary and that give the reader a lot of information. A sentence like "He was unattractive and very short with glasses" doesn't really tell you much about the character, but saying something like "He hated the way he looked, like the nerd that gets picked on in every movie, and he was always trying to find ways to look a little taller" both gives you an image of the character and tells you a lot about who that person is on the inside as well.

Sometimes you only have a few lines to build a strong character or to create a setting that feels real to the reader, so including the right tiny details matters a lot. In the above example, you only want to spend time talking about how a character feels about his looks if that is central to the story; if how the character look doesn't matter to the story, then that bit of information can be left out. Similarly, when you're describing a place, only go into a lot of detail if those details will be important later. If not, just a few words to set the scene will do. And remember, you don't need to go overboard - a few well-placed details can do more than several long paragraphs and you won't lose the reader's attention.

Those little details also matter because they'll help ground your story in what feels like a real place to the reader. If you just say things like "He got in the car" or "He went into the house" without describing the car or the house, the reader isn't going to feel connected to your story. Instead, it will just feel like it could be happening anywhere, to anybody, which isn't going to hold the reader's attention. You have to include enough detail so that readers can visualize the world of your story and believe in it.

7. Help the reader get started

With the limited space of a short story, you might decide that you want to just start the story right in the middle of the action, but plunging the reader in headfirst isn't going to do you any favors. Readers needs some guidance in the first few paragraphs about what kind of story they're going to encounter, otherwise they'll be confused, and they might just give up. Opening with a character whose life is in danger isn't going to engage the reader, since nobody is going to care about character they've just met and know nothing about. The exposition phase doesn't have to be long, but you need to put up a few signposts for your reader early on so that they have an incentive to stick around.

Character studies can be interesting, but the best short stories balance strong characterization with interesting plots. The action of the story doesn't have to be anything big or intricate-remember, you want to keep the focus of your story pretty narrow-but, unless you're a pretty awesome writer, nobody is going to want to read your story about two people who sit in a room and talk. It's only when your characters start interacting with the world you built around them that they'll really come to life, and only once they come to life that the reader will care about what happens to them next.

It's probably obvious that you care about the characters in your story - you're writing it after all - but why should the reader? If you want to person reading your story to finish it (or, if the audience if your teacher, if you want her to enjoy it), then you need to give her a reason to care about what happens to your characters. This means you need to have clearly defined stakes, which are the possible consequences for your characters. If a couple in your story is having a fight, the audience needs to know what the stakes are: are these people thinking about divorce? Is there a threat of physical violence? If the reader doesn't know, then the fight doesn't seem significant. When there aren't any stakes - that is, if your characters aren't fighting for anything-then there's no reason for anyone to care.

10. Be ruthless with your editing

Because every word in a short story counts, you need to not only write concisely but also be a ruthless editor. Any detail, word, or line of dialogue that isn't essential to the story should be left on the cutting room floor to make room for better writing. It can be painful to delete work that you've put so much time into, but learning to get rid of the fluff you don't need will make your story stronger in the end.

11. There are exceptions to every rule

Rules for good writing can be found everywhere, but at the end of the day there's no formula for the perfect story. Indeed, there isn't really such a thing as a "perfect story." People's preferences are different, and everyone enjoys different types of stories. So, if you want to experiment with crazy formats or write a story entirely in the 2nd person, that's up to you, and there's nothing wrong with writing outside the box. Just remember that with all this talk of plots, characters, formatting, and word choice, the goal is always to engage and entertain the reader.
back to all posts
RECENT POST

I like your work and the whole process. It is rather simple and I get answers to my questions. I would prefer to avoid any deadline extension in the future. Thank to my writer for his work.