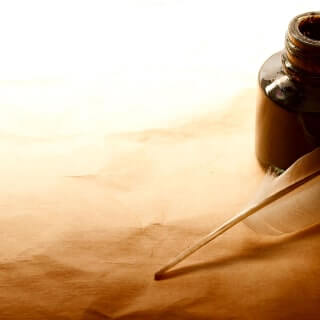 May 03, 2013
By the time we start writing papers in high school and college, most of us know the basics of verb conjugation. We constantly move between past, present, and future tense in our conversations, and those skills translate onto the page. But when it comes to research papers and essays, students will often find that knowing how to conjugate isn't enough. When you're working on academic papers, you have to know the conventions for using tense as well as the actual rules of conjugation.

Before we start going through the ins and outs of working with tense, first we need to go over a few terms that everybody thinking about tense needs to know.

The present tense describes events happening in the current moment in time (I talk, he thinks).

The past tense describes events that occurred prior to the present moment (I talked, he thought).

The future tense describes events that will happen after the present moment (I will talk, he will think).

The simple tense describes discrete events that have a distinct beginning and end.

The continuous tense (also called the progressive) describes actions that take place over an unspecified time period or are ongoing (I am talking; he was thinking). Both the simple and continuous tenses can be combined with present, past, and future tenses.

Every academic discipline has its own guidelines about using tense. You'll find some of these rules in style guides or textbooks, but many of these aren't official rules. Instead, they're conventions that most, but certainly not all, professionals in the field follow and which can be bent or broken depending on the writer's style.

When writing about works of art like novels or paintings, it's convention to use what's called the literary present tense. The nuances are shown in the examples below, but the basic idea is that you should assume events happening in a piece of art exist in an eternal present tense; no matter when you read The Great Gatsby or Hamlet, you should assume those events are always in the present tense. The literary present tense is used in historical writing as well.
Accordingly, when you write using the literary present tense, you use the present tense to discuss fictional events (e.g., things happening in a novel or short story) while the past tense is used to discuss historical events (e.g., things that happened in the life of the writer).
Example
Early in the novel, Mrs. Cunningham declares that Willoughby "is not a man one would consider marrying. - Both the introductory text and the verbs in the quote are in present tense.
Nick states early in the novel that he excuses Gatsby's behavior, but he shows no sympathy for Tom and Daisy. - When describing events from a novel, the present tense is used.
Fitzgerald completed the novel in 1930, but it was not published until after his death. - The verbs here are in the past tense because they are describing real, historical events.
There are a few times when it's acceptable to use the past tense when describing literary works, usually when doing so will make the meaning of the text easier to understand or when a quoted passage contains several different tenses.
Example
When Marlow first appears, he is a mysterious figure. He tells the story about what happened in Africa while shrouded in darkness on the ship deck. - Here the present tense is mixed with the past tense because the text is describing two layers of time (Marlow on the ship deck (the present) and the story Marlow is telling which is set in the past).
You should also leave verbs in quotations in the tense as they appear in the text.
Example
Fitzgerald goes on to say that Gatsby "never knew, nor cared" about the details of that night. - Here the present tense is used to introduce the quote, but the past tense is left inside the quotation marks.
Note that when using the past tense to discuss historical events or the present to discuss works of fiction, you may need to use progressive and perfect tenses to indicate ongoing events or the order of events in the past.
Example
While Mrs. Bennett is scheming to get her daughters in front of Mr. Bingley, Elizabeth meets Mr. Darcy on the dance floor. - Here, the simple and progressive present are mixed to show that two events are happening at the same time.
In the 1930s, Churchill had advocated against the Nazi regime, and in later years his staunch refusal to compromise with Hitler defined the British war effort. - Here, the progressive past is used to show an ongoing action (had advocated), while the simple past is used to show a discrete event (defined).

In the sciences, many writers use guidelines similar to those for literary present tense when writing research papers, although it's important to keep in mind that the conventions for research papers are much less strict. While these guidelines can help you write a research paper that's consistent and makes sense, it's often not necessary to strictly follow these rules.
Much like the literary present tense, when writing research papers you can think of your research (e.g., the articles and books you're citing) as being in an eternal present tense. This means you should refer to them in the present like you would works of art. However, when referring to historical events, such as when a book was published, those will be in the past tense.
Example
In their 1965 paper, Jules and Veerland describe the effects of sleep deprivation on older patients. - The present tense is used to discuss a particular study even though it happened in the past.
When the book was published in 1997, it caused a stir in academic circles. - The act of being published is a historical event.
There are times when it's acceptable to use the past tense to discuss the research of others. For example, if the writers of a particular study have since changed their mind or published work that contradicts their earlier position, it can make more sense to describe their work in the past tense.
Example
Jones and Wollstone's early work (2003) presented the theory that the hormone was secreted in response to stress, but later research (Jones and Wollstone, 2007) suggested that this was not the case. - Here, the verbs are in past tense to stress the fact that Jones and Wollstone no longer believe the theory they put forward in their older work.
As was stated above, there's no clear rule for when to use past or present in research papers. Often what's best is an issue of style and will depend on what point you're trying to make in your work. For instance, if you want to discuss the current state of thought about a particular issue, you would want to use the present tense, but if you want to stress that a certain idea is no longer commonly held, then you would use past tense.
When writing about your own experiments, any work that you have completed should be considered a historical event, i.e., a completed event that occurred in the past. Accordingly, you should discuss your work in the past tense.
Example
At six weeks, the seedlings were divided into two treatment groups. - The past tense is used because the experiment was done in the past.
back to all posts
RECENT POST

It is the only service where I order my assignments because here you will be assisted be real experts only! Thank you for my high-quality (as always) book report and such a pleasant discount!