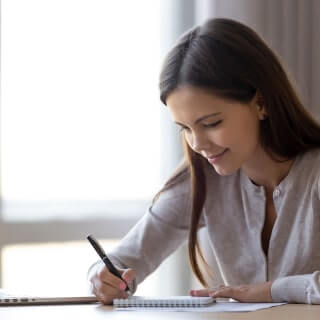 Sep 28, 2012
So you're ready to write a research essay. You've come up with an interesting topic, honed a smart thesis, spent hours researching and organizing your notes, and painstakingly outlined your paper paragraph by paragraph. But how do you actually get those ideas on paper? Even the most thoroughly researched essay will fall apart if you can't arrange your argument in a way the reader understands. Fortunately, there's a foolproof method to writing body paragraphs that will make your essay clear and easy-to-follow.

The Shaffer model for paragraphs will help you organize your evidence and thoughts into cohesive body paragraphs. A basic Schaffer paragraph will have five sentences: a topic sentence (TS), one concrete detail (CD), two sentences of commentary (CM), and a single concluding sentence (CS). Let's start by breaking down what each of those sentences should look like so we can see how the paragraph fits together as a whole.

Every body paragraph should start with a topic sentence that tells the reader exactly what you are going to cover in that particular paragraph. It should be clear and concise. You don't need to provide any sort of proof or analysis in the opening sentence (that part will come later). Instead, you only want to introduce the reader to your idea.
Everything else in the paragraph should relate back to this topic sentence, so you want to make it as specific as you can. Think of it as being like a mini-thesis - you want to tell the reader what you are about to prove in the paragraph.

Follow the topic sentence with a concrete detail that backs up the claim you make in your topic sentence. This can be a fact, statistic, example, plot point, or any other evidence you can use to support your point. When choosing your concrete detail, keep in mind that your source will help make or break your argument - the more reliable and accurate your concrete detail is, the more credible your paper will be. When possible, use direct quotes from resources like primary texts, historical documents, or research articles, and try to avoid basing paragraphs around vague ideas or opinions. And remember - always cite your sources!

Immediately following the concrete detail should be two sentences discussing its meaning. It's important that you not just restate your evidence or provide more summary; you want to add something new. This should be the meat of the paragraph - it's where you provide your own analysis and ideas. Explain how the evidence supports your argument and elaborate on what it means. What can you infer from the evidence? What insights does it provide? Make sure your analysis refers back to the topic sentence in some way and stays focused on your argument.

The last sentence of each body paragraph should sum up the point you've made and connect the paragraph to the paper's main thesis. Often the sentence will start with a phrase like "as a result", "therefore", or "due to" that links the evidence back to the essay's larger argument. You can also use this sentence to provide a transition into the next paragraph.
Below are two examples of Schaffer paragraphs with the sentences labeled:

Variations on the Schaffer Paragraph

The five-sentence Schaffer paragraph is the most basic body paragraph, but it can easily be expanded to create longer, more in-depth papers. The easiest way to expand the Schaffer paragraph is to add a second concrete detail along with two more sentences of commentary.
The longer paragraph would then look like this:
The second concrete detail may be used to reinforce your evidence from earlier in the paragraph; for example, if you have two related quotes from the same source you can use both to make your argument stronger. The second concrete detail can also be used to compare and contrast. In a paper comparing two historical sources, for example, you might want to include quotes from each to highlight similarities or differences between the two texts. A third way to incorporate more evidence in your body paragraphs is to quote from secondary sources. This is especially helpful if you're writing a research paper in which you'll need to engage with arguments from other scholars.
Here's the previous Schaffer paragraph on Jane Austen expanded to include a quote from a secondary source:
Keep in mind that for every extra concrete detail you add you need include at least two more sentences of analysis. A good rule of thumb is that the commentary should take up twice as much space as the evidence - you want the paper to focus on your ideas and analysis, not on the words of others.
If you're looking to add length and depth to your paper, it's almost always a good idea to go back in and add more commentary: for an experienced writer this sentence number isn't set in stone, and teachers will always be impressed when you take the time to dive beneath the surface of your evidence.

A good acronym for remembering the structure of a body paragraph is PEAL, which stands for Point, Evidence, Analysis, and Link. As you'll see, the outline is very similar to what's listed above for Schaffer paragraphs, but this formula allows you more leeway with how much space you'd like to use for each section.

As with Schaffer paragraphs, you should follow your first sentence by introducing evidence in the form of quotes, statistics, or examples.

After you present evidence you need to analyze it. Why is this quote or statistic important? How does it support your point? What inferences can you draw? (A note: this section is sometimes labeled as "Explanation," making the acronym PEEL. No matter which letter you choose, though, the idea is the same - to give your own interpretation of the evidence.)

Finally, you want to conclude your paragraph with a sentence that links it to your overarching thesis. How does the argument and evidence in this paragraph support the larger argument you're making in the essay?
All the sample paragraphs in this article also work as PEAL paragraphs.
This might seem like a lot to tackle all at once, but it's worth doing right. Essays in every discipline, from biology to history to comparative literature, and at every grade level, from middle school to college, can be written using Schaffer and PEAL paragraphs. If you take the time to learn and practice the format now, you'll be thankful the next time you sit down to write!
back to all posts
RECENT POST

Satified with my dissertation. Topic covered, methodology done right, literature is up to date, referencing style followed.Thank you again!

I like your services and don't regret getting my papers done here. I don't need a lot of help but since I'm a working student I don't have enough time for all my papers. I always order in advance so the deadline extension was ok with me. Free revision option is great! I am always sure I would get what I wanted.