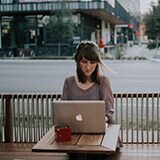 May 08, 2013
Every language has its own idiosyncrasies, and English is no different. From adverb placement to pronoun usage, there are lots of little rules in the English language that can make learning to speak and write formally a challenge. One of the biggest of these issues is idioms-a combination of words that have a culturally specific meaning that can't be figured out from the words alone. In other words, when you see an idiom there's no way for you to figure out what it means by just looking at it; instead, you have to learn them all one by one.
Some of the most common idioms in English are what's known as phrasal verbs, which are verbs combined with other parts of speech. While many idioms aren't used in formal, academic writing, phrasal verbs are very common, so it's important to understand what they are and how they work.

Before we get started, here are some of the terms you'll need to know:

Describes an action or a state of being (She ran quickly; I am hungry).

Describes how nouns are related to each other in space and time (the cat is under the table; eat breakfast before you go to work).

In grammar, a particle is a catch-all term that describes words that don't fit into one of the eight parts of speech (noun, verb, article, pronoun, adjective, adverb, conjunction, and interjection). Usually particles are helpers to other words or space fillers in conversation.

What Is a Phrasal Verb?

A phrasal verb is a verb that is followed by a preposition or particle that changes the meaning of the verb, usually in a way that is not obvious just from the words themselves. For example, by itself the verb "to play" means to do something for fun or entertainment. But, when you add the preposition "down," you get an entirely new meaning: "to play down" means to minimize something (e.g., He played down the chance that we would win so we wouldn't get our hopes up.).
There are two main types of phrasal verbs. In separable phrasal verbs, the noun and the particle/preposition can be separated with a noun or pronoun placed in between them (e.g., They're going to close the store down.) Inseparable phrasal verbs, as the name suggests, can't be separated (e.g., it's not correct to say "He broke the house into." Instead, you'd say "He broke into the house."). Unfortunately, there's no clear rule about whether a phrasal verb is separable or inseparable-it's just a matter of convention. So, if you want to use phrasal verbs correctly, you just have to memorize them and get used to using them.

Below you'll find a list of common separable and inseparable phrasal verbs along with definitions and examples that will help you know if you're using them correctly.

back up - to support
Example
Will you back up your boss at the meeting?
Will you back your boss up at the meeting?
bring about - to cause something to happen
Example
We are going to start a petition to bring about change.
We are going to start a petition to bring change about.
bring on - to cause
Example
If you don't finish in time, you'll bring on the teacher's anger.
If you don't finish in time, you'll bring the teacher's anger on.
bring up - to raise or care for from childhood
Example
She brought up three daughters all by herself.
She brought three daughters up all by herself.
call off - to cancel
Example
The school called off the dance because of the storm.
The school called the dance off because of the storm.
carry on - to continue
Example
It's not polite to carry on with a cell phone conversation during the speech.
It's not polite to carry a cell phone conversation on during the speech.
carry over - to continue at another time
Example
There was so much to do that the meeting carried over to the next day.
There was so much to do that they carried the meeting over to the next day.
clear up - to clarify
Example
Can you clear up your argument in the second paragraph?
Can you clear your argument up in the second paragraph?
cut out - get rid of, delete
Example
You should cut out the third paragraph of your paper to make it shorter.
You should cut the third paragraph out of your paper to make it shorter.
dress up - to put nice clothes on; to adorn
Example
We should dress up the room with more decorations.
We should dress the room up with more decorations.
figure out - to come to understand
Example
Did you figure out what the song means?
Did you figure the song out?
fill out - to complete a form
Example
You need to fill out this form before you see the doctor.
You need to fill this form out before you see the doctor.
hand over - to give something; yield control
Example
She handed over the class to the substitute.
She handed the class over to the substitute.
keep up - to maintain pace; to continue
Example
If you keep up the good work you'll be promoted
If you keep the good work up you'll be promoted.
let out - to release
Example
I let out the dogs to play in the yard.
I let the dogs out to play in the yard.
make over - to redo; to make better
Example
We need to completely make over the house before we move in.
We need to completely make the house over before we move in.
point out - to highlight or indicate
Example
Once I pointed out the mistake they were able to fix it quickly.
Once I pointed the mistake out they were able to fix it quickly.
put off - postpone; delay
Example
If you put off your work you'll be sorry tomorrow.
If you put your work off you'll be sorry tomorrow.
rule out - eliminate as a possibility
Example
The sister has been ruled out as a suspect.
We've ruled the sister out as a suspect.
run off - to make leave
Example
The girls ran off the boy from their slumber party.
The girls ran the boy off from their slumber party.
shut off - to stop something from running/being on
Example
Shut off the hose before the yard floods.
Shut the hose off before the yard floods.
spell out - to explain in detail
Example
Spell out exactly what happened or you'll be in trouble.
Spell what happened out exactly or you'll be in trouble.
tear up - tear into small pieces
Example
I tore up the report so no one could read it.
I tore the report up so no one could read it.
think over - to consider
Example
I need to think over the proposal before I accept.
I need to think the proposal over before I accept.
wear out - to use something until it is no longer usable
Example
She wore out the tires on her car and now they need to be replaced.
She wore the tires out on her car and now they need to be replaced.

back out of - to quit; fail to keep a promise
Example
I'm mad because she backed out of our agreement.
break into - to enter a building unlawfully
Example
They broke into the store to steal the cash.
catch up with - to cover the distance between two things
Example
She left a few minutes late but was able to catch up with the group.
come down with - to become sick with
Example
She came down with the flu right before finals.
do away with - to get rid of
Example
The committee voted to do away with the tests next fall.
drop out (of) - to quit or leave
Example
She dropped out of school in order to start a new job.
fall back on - to use for emergencies
Example
If the babysitter can't come we'll have to fall back on your parents.
fall out (with) - to fight or disagree
Example
My friend and I fell out over the cost of her wedding.
get down to - to become serious about
Example
We need to get down to the real issue here, not argue about trivial concerns.
hold out against - to resist
Example
If we hold out against their demands they'll have to surrender.
keep to - continue
Example
If you keep to it, you'll figure out the problem.
keep up with - to match pace with
Example
Keep up with the group or else you'll get lost.
make up for - to compensate
Example
She sent cookies to make up for the fact that she couldn't come.
put up with - to tolerate
Example
He puts up with his sister because he loves her.
run for - to campaign
Example
He is running for class president.
stand up to - to not back down; resist
Example
You have to stand up to bullies.
touch on - to mention briefly
Example
The teacher touched on the topic, but said she'd discuss it more later.
back to all posts
RECENT POST

Could not understand clearly what was a research proposal and how to make it, but this service helped me with it, and now it looks like it should!

What a fool I was before trying your proofreading services. Just one day and what a result! You definitely made my essay shine bright like a diamond :D Not my last order, for sure!