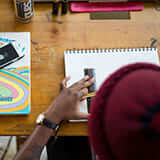 How to Write an Essay Introduction

Oct 22, 2012
Getting started is often the hardest part of writing an essay. Even if you're well-prepared it can be overwhelming when you sit down in front of that blank page on your computer screen. But as hard as it can be to write, the introduction is a still vital part of a good essay. It's the first words your reader sees, and it sets the tone for the rest of your paper. The good news, though, is that writing an introduction doesn't have to be a chore.

What's In An Introduction?

Like the name suggests, the introduction is where you introduce the reader to your paper. You should tell them what you're going to be discussing and provide them with any information they'll need to understand your argument. It's not the place for any sort of analysis - you can save that for the body of your paper.

Writing the introduction to an essay will be much, much easier if you take time before you start writing to get organized. Part of the reason students often find introductions so difficult is that they aren't really sure what they want to say. If you're still trying to figure out your topic or thesis then you're going to have a hard time explaining those ideas to your reader. So, before you type a single word, make sure you have a well-defined subject area as well as a strong, clear thesis.
Having an outline will also make it easier to write your introduction. Again, when you know exactly what topic your paper will focus on and how it will be organized, it'll be easy for you to identify what your audience needs to know.

When to Write the Introduction

There's no set format for introductions, and the content can change depending on what kind of paper you're working on. In general, though, there are a few topics you'll want to include. The acronym CPTP can help you use those topics and come up with ideas for your introduction.

Provide the reader with context for your argument. What kind of information will the audience need to understand your paper? If you're writing a history paper, you may start by identifying the time period and outlining important events or people. For an English paper, you may want to discuss the author as well as plot points and characters that will be important in your work.

This one is pretty basic - you need to tell the reader what you're going to talk about. Start by identifying a general area to orient your reader, then narrow it down to your specific topic. Are you going to explore a poet's use of imagery? The role of Japan in World War II? Renewable energy sources? You don't need to go too in-depth or start providing analysis; all you want to do is tell the reader what they're going to be reading about.

Why are you writing this paper? If it's a persuasive paper or personal essay, you need to tell the reader what you're trying to accomplish. Do you want to convince people of a particular argument? Share information on a particular topic? If it's a scholarly paper, explain to the audience why your topic is important. Even if you're just writing because you have to, try to come up with a reason that the reader would want to finish your paper.

End your introduction with a strong thesis that clearly states your argument. When they get to the end of the introduction, the reader should know exactly what you're going to try to prove in the body of your paper.

Below are three examples of introductory paragraphs for various types of papers with the sentences labeled for Context, Topic, Purpose, and Thesis.
Poets often rely on imagery to evoke emotion in the reader (T). Comparing a lover's beauty to a summer's day or imagining life as a path through the woods is an effective way to engage the reader's imagination and stir passion. For 19th century poet Gerard Manly Hopkins, the source of that imagery was the beauty of nature (C). In his dozens of published poems, Hopkins paints pictures of swooping birds, green fields, and other dazzling natural displays in order to fill the reader with a sense of awe and wonder (C). Hopkins was a deeply religious man, and he used nature imagery in his poems in an attempt to create in the reader the same sublime feeling he experienced when outdoors in God's creation (C). In the most successful of these poems, "Pied Beauty" and "The Windhover", Hopkins is successful in using the imagery of birds to capture a fleeting moment of transcendence (TH).
Every year, Americans throw away over 250 million tons of trash (C). From food packaging to disposable cups to dead batteries, we're a society built on the convenience of disposable products. This throw-away lifestyle is possible in large part due to the invention of plastics: cheap, moldable polymers derived from crude oil (T). Unfortunately, the same traits that make plastic useful also make it incredibly damaging to the environment (C). It's durability means that it will take hundreds or thousands of years to decompose, and many of the chemicals that make it flexible and cheap are carcinogenic or estrogenic. The truth is, we don't really know the long-term effects our plastic addiction will have on the planet or on our own health (P). Because plastics are so damaging, it's imperative that we turn our attentions away from plastic and instead focus on finding new, safer materials that can meet our needs (TH).
England's Henry VIII is known for many things, most of them scandalous (T). He was married six times and executed two of those wives, and his court was known for its excess and ostentatious displays of wealth (C). He's even been the subject of popular movies and TV shows that highlight his lust and gluttony. In The Other Boleyn Girl, a young, handsome Henry VIII plays sexual politics with the Boleyn sisters, and on TV he's depicted as a lustful, vengeful lover in The Tudors. Unfortunately, these depictions of Henry VIII often pile on the sex and glamour at the expense of his true historical significance (P). While he may be best known for his matrimonial escapades, his true impact on Medieval Europe was his break with the Roman Catholic Church. When he split from the Pope to become the head of the Anglican church, he made England a protestant nation almost overnight and forever changed the landscape of religious life in the West (TH).
back to all posts
RECENT POST

I got a B without any effort, what else can I dream of? Finally, I can forget about chasing the deadlines and immerse myself into the things I really like! Thanks for professional assistance!

I'm basically living my dream life by majoring in the thing I love, but sometimes I physically cannot meet some deadlines. My friend told me about you, and I'm happy I listened to her. My argumentative essay from you got an A!