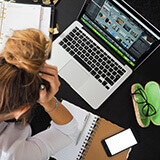 How to Use Articles

Mar 20, 2013
Articles - a, an, and the - are one of the more difficult grammatical topics for those grappling with the complexities of English. Particularly if you're used to a language that has pretty simple rules for when you use them, articles can be tricky to figure out. Unfortunately, though, articles are one of the many grammatical hoops you have to jump through in order to write well. They're especially important in academic work, where a misplaced or improperly used article will jump out at the reader and can threaten to sink your paper. So how can you tell when to use English articles?

What is an article?

Technically speaking, an article is a type of adjective that describes the definiteness of the noun that it modifies (remember that a noun is a person, place, thing, or idea). When we talk about definiteness, it means we use articles to tell the reader whether we're referring to a specific person, place, thing, or idea or just some non-specific version of that noun. For example, with an article, a noun like girl could refer to a specific girl or just to any random girl out there. With a few exceptions (which will be outlined below), most English nouns should have an article attached.

English has three main articles: the, a, and an. The rules governing how we use these articles can seem overly complex, but by breaking them down into categories we can hopefully make things a little easier. We're going to start with singular, countable nouns, which are nouns that exist as separate, countable entities, such as cats, tables, or people.

The word the is what's known as a definite article: it tell the reader that you are talking about a specific noun that the reader is familiar with either from the context of the sentence or because that thing has been previously mentioned.
Example
Even the narrator of The Great Gatsby doubts Gatsby's incredible stories.
My sister said we need to clean the car before mom gets home.
In both the above examples, the is used to indicate that you're talking about a specific object. In the first, we use the word the to indicate that the narrator is a specific person. In the second, the phrase "the car" tells the listener that the speaker means a particular car (presumably, the person listening has enough information to determine which car is being talked about).

A and an are indefinite articles, which means they tell the reader that you are not talking about a particular noun, but instead any item in a group. If I say "a table," I'm not talking about a specific table; I'm talking about any table.
Example
Nick asked a dancer at the party about Gatsby, but she couldn't tell him anything about the mysterious host.
My sister said we need to buy a cake before mom gets home.
In the first example above, Nick is talking to one of the dancers at the party, but not to any one in particular. Similarly, in the second sentence, the speaker needs to get "a cake," meaning that it doesn't have to be a specific cake; instead, any cake will do.
Note that both a and an are another way to say "one." If I need to buy "a cake," it means I only need one. This will be important we start talking about plural nouns.

When to use a and an

A and an are both indefinite articles, and which you use depends on the beginning sound of the noun they precede.

We've just looked at the basic rules for how to use definite and indefinite article for countable nouns, but, as with most rules for using English, it's often not that straightforward. While the rules outlined above will get you through a basic sentence, there are quite a few other grammatical scenarios you need to be aware of.

Remember above we talking about countable nouns, which are people, places, things, or ideas that can be talked about as individual items. Now we're going to talk about uncountable nouns, which are things that exist as a group or mass, and so can't be counted. Examples of mass nouns include things like milk and information: you can't have a single milk or several informations. Note that this doesn't include nouns that describe groups of things like team or family - for are purposes here those function as singular nouns and so require an article.
Uncountable nouns do not require an article, but as with plural nouns you can add the article the if you want to make the noun definite:
Example
Did you pick up milk from the store?
I need money to pay for the cake.
Did you pick up the milk from the store?
I need the money to pay for the cake.

Proper nouns also do not require an article. Because a proper noun is already specific (if I say "John Smith," you already know I am talking about a particular person), you don't need an article to tell you whether it's definite or indefinite.
Example
We are going to meet Michael at the theatre.
The new building will be on Main St.

Nouns with other determiners

There are lots of other words that serve the same purpose as articles and so can stand in for them. Words that tell you whether something is definite or indefinite are known as determiners, and words that already have a determinant don't need an article too. A few common determinants include:
Example
I have six days before the test.
My cat is stuck in that tree.
Whose hat is on the table?

Here's the short version of all these long-winded rules:

My experience with bestcustomwriting.com was good. My essay was completed on time, content was ok and I could submit it without any revision. Will order again in the future.