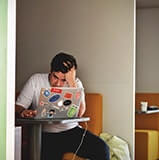 Jan 25, 2013
In the English language it seems like there are certain grammar and style questions that always trip people up. Whether you're a professional writer or just working on a class paper, some grammar issues can catch any of us unprepared. While many of these might not seem like a big deal - who really cares if it's who or whom, anyway? - learning to handle these grammar quandaries properly will make a big difference in your writing. So, if you want to show your teacher that you're no amateur, here are the answers to four sticky grammar situations.

Let's start with a big one - who or whom? It's a popular one with teachers, and while they may not matter too much when you speak, when used incorrectly in formal writing they'll make the sentence stand out like a sore thumb. Many people think they can be used interchangeably, but in fact each serves a very specific purpose.
To understand when to use who versus whom, first you have to understand how a sentence is constructed. Every sentence has a subject, the person or thing performing an action, and a verb, which describes the action. For example, when I say "She ate," it's a complete sentence. I know who is performing the action (she) and what she's doing (eating). Some sentences will include an object, that is, a person or thing that receives the action of the verb. In the sentence "She ate cookies," cookies is the object of the verb; it's what she ate.
Both the subject and object in a sentence will be nouns (persons, places, things, or ideas), which is where things get tricky. Both who and whom are pronouns, meaning they can be used in place of nouns in a sentence. So how do you know which one to use? It's actually pretty simple: who is used in place of a subject, and whom is used in place of an object. If the noun is performing the action of the sentence, it's replaced with who: Who ate the cookies? Who opened the window? Notice that we can replace the pronoun with a subject to make a complete sentence-She ate the cookies. Alex opened the window.
If the pronoun is the object of the verb, then it's replaced with whom: To whom did you give the book? Whom will you take to the dance? When we replace the pronoun in the sentences, they receive the action of the verb-I gave the book to my brother. I will take Liz to the dance.
The short answer: Use who to replace the subject of a sentence, and whom to replace the object.

The pronoun who can also be tricky when it's used in adjective clauses. These clauses, which modify a noun in the sentence, start with a relative pronoun like who, whom, whose, that, or which. When I say " The girl who ate the cookies should buy us more," the clause "who ate the cookies" is an adjective phrase-it give us more information about the noun girl. The trouble arises when we have to decide whether to use who or that. Many of us were taught that is the noun being described is a person then we use who, and if it's a thing we use that. So I would say "The mailman who is always late will be here in the afternoon" and "The bus that is always late didn't arrive until the afternoon."
Technically, though, it's correct to use either who or that to describe people. If you say "The mailman that is always late will be here in the afternoon," you aren't being grammatically incorrect. However, in many style guides, and in common usage it's preferred that you use who to refer to people and reserve that for things. The only exception is when you're talking about a non-specific person. In the sentence "The runners that arrived early got the good parking spots," I'm not talking about a specific runner, but a generic group of people. Here, it's ok to use that.
The last issue when it comes to choosing who versus that is pets. Again, it's technically correct to use both, however, when it comes to style it's generally preferred that you use that when talking about pets unless you are talking about a particular, named animal. So you'd write "The dog that bit my sister hasn't been found," but when talking about a more familiar animal you'd use who: "Spike, the dog who bit my sister, ran away."
The short answer: Either is technically correct, but in general you should use who to describe people and that to describe things.

Lie and lay can be easily confused because they both mean to recline/put down, but again there is a pretty simple grammatical distinction. For this one we're going to go back to subjects and objects. Remember, a subject is the person or object performing the action, and the object receives that action. Now, when we talk about lie versus lay, we're concerned with whether the verb has an object. If it does, then we use the verb lay: I will lay dinner out of the table for you. Here, we're laying down an object (dinner). If the verb has no object, then you use the verb lie: I'm going to lie down for a few minutes. In this sentence, the subject is a person acting on their own to recline.
This particular question gets more complicated when we need to conjugate the verbs, cause lay is actually also the past tense of lie, while laid in the past tense of lay:
Unfortunately, there's no really good way to remember this other than just memorizing it, so here's so examples to help you practice.
Lie
I like to lie down on the couch when I'm tired. (present)
I lay down last night but couldn't fall asleep. (past)
If I had lain down when I felt sick I wouldn't have passed out. (past participle)
Lay
Lay the plates out on the table before the guests arrive. (present)
I laid the books where you could find them easily. (past)
I would have laid the money on the counter but the waitress was gone. (past participle)

First, let's define what an absolute is. There's no technical grammatical definition, but an absolute is generally considered to be a word that describes something that doesn't have degrees or gradation. Think of it as a word that has either a yes or no answer. You can be dead or not dead, pregnant or not pregnant, but you can't be sort of dead or mostly pregnant: you either are or you aren't.
Technically, absolutes don't take adjectives, however, it's common when people are speaking or writing to try to modify absolutes. Often this just creates wordiness, but sometimes it can make the writing seem contradictory, confusing, or just plain bad. Below are a few common examples and explanations to help you get a feel for when modifiers are unnecessary.
Old-school grammarians and teachers can get pretty worked up over this rule, but the use of modifiers with absolutes has actually been around a long time, and has been growing more and more accepted in spoken and written English. Language is always changing, and this one of those times where we can see that change in action. However, if you're working on a formal paper for a class or research project, it's best to err on the side of caution and keep your absolutes unmodified.
The short answer: Feel free to use modifiers with absolutes in conversation or informal writing, but stay away from them in formal writing.
Language isn't set in stone. Instead, it's better to think of language as a living, changing organism. People are constantly changing the way we use and define words, and changes to the rules of grammar usually follow behind (although often very slowly). A lot of the rules we've gone over here currently occupy this shaky middle ground between the proper way things used to be done and the way people actually use language in the real world. This means that sometimes the technical rules of writing haven't quite caught up with the way we all speak, and while it might sound silly, it's always best to follow the letter of the law when you're writing formal papers.
back to all posts
RECENT POST