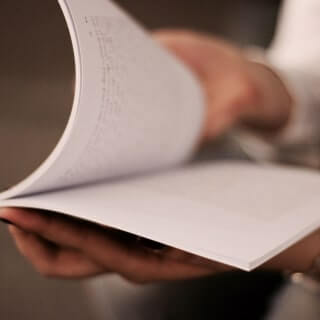 Finding the Right Tense in a Research Paper

May 14, 2013
When you're writing a research paper, verb tense is something you might not initially worry about. If you weren't giving it a lot of thought, you might have just started with a specific tense and stuck with it the whole way through, or maybe you haven't even noticed what tense you're using. When you're worrying about content, the rules of grammar aren't necessarily at the front of your mind. But there are lots of conventions and guidelines out there for specifying how tense should be used, and if you're writing a research paper you need to know them.

Put simply, tense describes when the action being described by a verb took place. In English, we divide time up into three simple categories-past, present, and future-and we can conjugate verbs to indicate when an action is taking place (remember, conjugation means either changing the spelling of a verb or adding helping verbs).
Before we start talking about which tense to use, it's important to understand the basics of tense. The topic of tense can get pretty complicated; for example, English has dozens of tenses that cover a wide range of situations, from two events both happening at different points in the future to an event that might have happened but is has continued into the present. For our purposes here we're going to focus a few fairly simple verb tenses. These include:
To understand tense, first you have to understand the relative position you'll be using. Remember, tense is relative-past and future only exists in regards to a specific "present," and the present can be different depending on the situation. When you're writing, you may think of that particular moment as the present, but a person reading that paper days, weeks, or years later is going to think of their moment as the present, and the moment you're writing in as the past. As with many things in grammar, there's no necessarily "right" way to look at this issue, but for our purposes here we're going to imagine the person reading your paper as being in the present tense.

Finding the Right Tense for Your Field

Every field has its own rules about verb tenses in academic writing. Some are fairly firm while others can be bent or mostly ignored if the writer so chooses. The advice here will be general and won't get into the specifics for any one field. Instead, we're going to go through some general advice that will help you understand how to think about tense and should help you get started off on the right foot.

The conventions of tense in academic writing are complicated, but most of the time it all boils down to a simple question-do I use past or present tense? The answer is usually that you need a mix of both. Below is a section-by-section breakdown of when to use past and present tense.

When to use present tense: Use present tense throughout the abstract and introduction. (The hormone ghrelin is one of the many biological factors that control appetite; this study looks at how ghrelin can be used to manipulate feeding behavior in mice.) By using the present tense you directly involve the reader in your work and let them know that it's ongoing instead of something that's already moved into the past.
When to use past tense: Use the past tense to discuss specific aspects of your work that have already been completed (the data was gathered from several sources) or when discussing the specific work done by others in the past (McIntyre showed that hormone levels rose steadily throughout the day). Basically if it's an action tied to a specific moment in the past, then it should be described in past tense.

When to use present tense: Present tense is generally used in the literature review to discuss general ideas that can be considered part of the current research landscape (critics group Shakespeare's plays into two distinct categories)
When to use past tense: Use past tense when discussing specific studies that are linked to a particular time period in the past or are attributed to people who are known to be dead, i.e., famous dead people, not just regular dead people. (Darwin argued that evolution was a slow-moving process; several early studies showed that hormone levels remained constant.)
It can also be a good idea to use past tense if you're discussing studies or papers where there has been controversy or changes in position by the authors. For example, Lopez stated that ... but has since proved that .... If you use the present tense in these cases, you can unintentionally be implying that a person currently believes something when in fact they've since changed their opinion.

When to use present tense: Present tense is rarely used in the methodology section. Pretty much the only time it's needed is if you include a general discussion of particular methodology (the Western blot is the standard test used to determine the presence of the hormone).
When to use past tense: Use past tense to describe any experimental or field work you've done. (The mice were then tested for the presence of the hormone).

When to use present tense: In general you want to use the present tense throughout most of your discussion. This includes discussion of your results (The data suggests that ghrelin levels can be easily manipulated) and limitations of your research (It is possible that the results were the effect of factors other than those being studied).
When to use past tense: The use of past tense in the discussion would be similar to the introduction, i.e., when you're talking about studies from a particular past time period.
When to use the conditional tense: When discussing future possible avenues for research, a critical part of the discussion, you'll likely use the conditional (e.g., could, should, would) tense. (In light of these results, future research could investigate the link between the two.)

First of all, remember that active voice is when the subject is performing the action of the sentence, e.g., The boy ate the cake. Passive voice is when the subject is receiving the action of the verb, e.g., The cake was eaten by the boy. In general the sciences prefer the use of the passive voice, while other disciplines encourage the use of active. The question of whether to use active or passive voice gets wrapped up questions about tense, although it is actually a separate issue.
Choosing the right tense, however, can sometimes make it easier to use the correct voice. If you're trying to stick with the active voice, you'll likely do better with present tense, but if you're using the passive voice you'll probably find you use the past tense more often.

It should also be noted that all the guidelines given here are only recommendations. Even professional writers and editors argue about which tense is correct, and style guides usually aren't much help. If you're unsure, try copying the style of a journal in your field or ask your teacher or advisor what they prefer. And, if all else fails, just go with your gut about what makes sense for what you're trying to say.
back to all posts
RECENT POST

Didn’t expect to receive my research paper so fast, but you guys have impressed me. I didn’t even have to move a finger! The formatting wasn’t exactly what I asked for, but it was all revised and corrected on demand. Thank you!

Thank you for the research paper on Saudi legal system. It was rather good and only some parts needed revision. The writer was attentive and fixed the paper when I requested. your support is amazing as well!