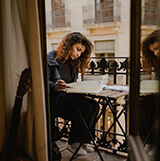 May 13, 2013
Conjugating verbs is a tricky business. As soon as we learn to talk we start to learn the basics of singular and plural verbs, but often when writing we come up against conjugations that are a little more complicated that he is and they are. Below you'll find a guide to helping you sort out some of these common conjugation issues.

The problem
All of the dogs needs to be fed.
None of the information are up to date.
Most of the time it's pretty easy to make subjects and verbs agree in English. Singular subjects get one conjugation (I talk, he is) while plural subjects get another (we talk, they are). For most nouns it's clear whether they're singular or plural, making conjugation pretty straightforward, but there are also times when it's not so easy to tell.
Some of the most common words to create this problem are pronouns like any, all, some, most, and none which will change from singular to plural depending on the prepositional phrase or noun that follows them. But while these pronouns can switch back and forth, it's actually pretty easy to identify whether they should be considered singular or plural. Basically, if the prepositional phrase refers to a singular noun, then the verb should be singular; if it refers to a plural noun then the verb should be plural. For example, in the examples above, dogs is plural and information is singular, so the sentences should read "All of the dogs need to be fed" and "None of the information is up to date."

2. Ones, things, and bodies

The problem
Everybody need to listen.
Another set of pronouns that cause trouble are the ones (everyone, someone, etc.), things (anything, everything, etc.), and bodies (everybody, nobody, etc.). Because these words can often be followed by prepositional phrases, it might seem at first like they follow the same rules listed above, but actually the rules for ones, things, and bodies is even easier-they're always singular. Therefore, the above example should read "Everybody needs to listen."

The problem
The class are going to get out early.
Collective nouns pose a similar problem to the pronouns listed above, which is that it's not always clear whether they're singular or plural. If you talk about a family or a class, you're using a singular noun to describe a group of people-so how can you tell if whether to treat it as a singular unit or a plural group?
In general, if all the component parts in a group noun are acting as one then you should treat that noun as singular. For example, in the example above, because the entire class is going to be getting out early, the noun class is singular: "The class is going to get out early." However, if we talk about the members of a group acting separately, then we treat them like a plural noun. In the sentence "The band are arriving on different buses," we can make the band plural because we're clearly talking about the members acting as individuals.
More often than not collective nouns will take a singular verb, and even when you have the option of making them plural you'll likely still be correct if you conjugate them as singular. There's no hard and fast rule here, so its best to use whatever fits with the spirit of each particular sentence.

4. Misidentifying the subject of a sentence

The problem
Her shoes, especially the green pair, is very pretty.
There is no apples left in the bag.
Sometime the problem isn't that you can't figure out whether the subject is singular or plural, but instead it's that you can't find the right subject in the first place. This usually happens when there are appositives or other syntax devices that separate the subject from the verb. For example, in the first sentence above it looks like the green pair is the subject since it's right next to the verb, but in fact the subject is her shoes, so the sentence should read "Her shoes especially the green pair, are very pretty." Likewise, in the second example the subject (apples) comes after the verb. The sentence should read "The are no apples left in the bag."

The problem
Her phone and her wallet was stolen.
Either the couch or the table have to go.
In these two example, the conjunctions and and or confuse the question of subject, but in fact the rules for these are pretty simple. Subjects joined by the conjunction and are always plural because you're necessarily talking about more than one thing. So, the above example should read "Her phone and her wallet were stolen."
When subjects are joined by the conjunction or, the verb should be singular because you're talking about either one thing or another, not both. So, the example should read "Either the couch or the table has to go." The only time these types of subjects have to take a plural verb is if both of the subjects are plural. If one subject is plural and one singular, the verbs should match the subject closest to it. So, you would write "The student or her parents have to attend the meeting" and "The parents or the student has to attend to attend the meeting."

6. Being tricked by odd words

The problem
Economics are my favorite class.
My pants is new.
Sometimes you'll mess up a conjugation not because you've broken some confusing grammar rule, but just because the subject of your sentence is a tricky word. English is full of nouns that, because of history or convention, seem singular or plural but are actually conjugated as the opposite. For example, words like economics, mathematics, and news look and sound plural, but are actually singular. So, the example above should read "Economics is my favorite class."
Similarly, there are also words that refer to a singular object but which are still conjugated as if they were plural. These include words like pants, scissors, and glasses. So, the sentence above should state "My pants are new." Unfortunately, there's no other way to deal with these words than to memorize them.
The problem

Don't like lab reports much because of all that preciseness, numbers, and details. So, it was a real relief to order my lab report here and forget about spending a night over this thing. Thanks for prompt and high-quality support!

Very happy with the lab report your writer provided. I am always so stressed when I get such tasks. I will definitely ask you to help me again.