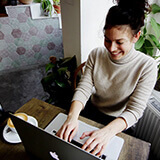 An In-depth Look at Adverbs

May 01, 2013
Most of us don't enjoy the tedium of long grammar lessons. Those blackboards or slide shows full of long, complex sentences that need to be broken down and analyzed word by word can make the head of even the best writer spin. But unfortunately, understand all those guidelines and rules is an important part of the writing process, particularly when it comes to academic writing, where even the smallest mistakes can make your work look bad or even lower your grade. To help you with your grammar woes, here's an in-depth look at adverbs.

What is an adverb?

Like adjectives, adverbs are modifiers that give the reader more information. They take a generic description or action (he ran) and add more detail to make it specific (he ran quickly). Adverbs modify any word that isn't a noun, including verbs, adjectives, other adverbs, and prepositions: (note that here and throughout the rest of the article the adverb is in italics and the word being modified is underlined):
The extra information that adverbs give us can answer a number of different questions:

Because they're both modifiers, adverbs follow many of the same grammatical rules as adjectives. However, there are a few areas in which the two parts of speech are handled differently. Below are the main rules to know when it comes to using adverbs correctly.

Unlike adjectives, which are always placed immediately in front of the nouns they modify, adverbs can often go several places in a sentence. The can go at the beginning or end of a sentence or on either side of the verb being modified. For example, all of the sentences below are grammatically accurate:
Correct
She quietly talked to the teacher.
She talked quietly to the teacher.
Quietly she talked to the teacher.
She talked to the teacher quietly.
There are few hard and fast rules for adverb placement, so using them correctly is often a matter of getting a feel for style conventions. If you're unsure it's always a good idea to try to keep the adverb as close as possible to the word it's modifying in order to avoid any confusion or extra work for the reader. So, in the above example, either of the first two sentences would be preferred (but again, any of the four would be technically correct).

Many adverbs are formed by adding the suffix -ly to the end of adjectives. Slow becomes slowly, happy becomes happily, etc.
Correct
She easily answered the all the questions on the test.
He stormed off angrily when he didn't get what he wanted.
However, just because this is often the case doesn't mean you can assume that every word that ends in -ly is an adverb. Many adjectives, including friendly, lovely, and silly, also end with this suffix, and some words ending in -ly can be either adverbs or adjectives:
Correct
The early start time meant that many of the students were late. (adjective)
We left early so we wouldn't miss any of the show. (adverb)
There are also many words that don't end in -ly that function as adverbs If you're unsure whether a word is functioning as an adverb or adjective, the only way to check is to identify the word it's modifying.
Correct
The race is starting now.
My mother usually answers the phone in the evenings.
She jumped high to avoid getting her feet wet.

As with adjectives, the endings -er and -est can be used to indicate degree, which means these suffixes indicate that something is more or greater than something else. -Er is used when comparing two things, and -est is used when comparing three or more items. Remember, these endings can only be used on words that have one syllable.
Correct
I can sing louder than my sister.
Out of all the kids in the class, I run the fastest.
Incorrect
I can reach highest than my brother. (Should be higher since you're comparing only two things).
I dance beautifulliest out of all the girls on the team. (The suffixes -er and -est can't be used with the word beautiful because it has more than one syllable.)
When adverbs have more than one syllable, like in the example above, the words more (for two items) or most (for three items), can be used to indicate degree going upward (i.e., bigger or greater). To indicate degree going down (i.e., fewer or smaller), you can use less (for two items) and least (for three items).
Correct
I dance the most beautifully out of all the girls on the team.
She worked less quickly when she was distracted by her friends.
Notice that the word than is used when comparing two things, and the article the is used to refer to a superlative (the highest or lowest in a group).

Adverbs are often used not to add new meaning to a sentence but instead to emphasize or highlight what's already there. These types of adverbs are known as intensifiers because they strengthen (or sometimes weaken) a certain word or phrase in the sentence without substantially changing the meaning of the sentence. Examples of intensifiers include really, completely, absolutely, so, mildly, and almost. Intensifiers are usually placed immediately in front of the verb they modify (but not always).
Correct
I really need to find those shoes.
She absolutely believed that she had done the right thing.
I almost cancelled the party because of the rain.
He wanted to win so much.

Adverbs can more pretty freely throughout the structure of a sentence, but when you're using several adverbs together there is a particular order they need to go in:
So, if you wanted to write a very long, complicated sentence with lots of adverbs, you could say: "She ran quickly through the field once that morning to find her dog." Obviously, that sentence is a bit clunky, but the order is technically correct.

Most of the time, adverbs will fit seamlessly within a sentence, meaning there aren't any pauses or jumps for the reader (most of the examples so far have been like this).
Sometimes, however, adverbs don't fit neatly in with the rest of the sentence and instead stand apart, usually because they are offering some sort of commentary on what's being said in the main clause. These types of adverbs are known as disjuncts and are set apart by commas.
Correct
Fortunately, we were able to find someone to replace her in the play.
Honestly, I don't know how we'll find the time to make breakfast.
She wants to play, too.
Other disjuncts include frankly, luckily, interestingly, unfortunately, clearly, and seriously. As you may have noticed, these are usually placed at the beginning of the sentence.

Often an entire phrase or dependent clause will function as an adverb. (Remember, a phrase is a related series of words, and a dependent clause includes a noun and verb that won't stand alone as its own sentence). Like regular adverbs, adverb clauses and phrases answer the questions how, when, where, why, and under what conditions.
Adverb clauses are dependent clauses that start with subordinating conjunctions such as because, before, if, that, than, since, unless, until, where, and while. These clauses can appear anywhere within a sentence.
Correct
I made a cake while you were sleeping. (When did you make a cake?)
Unless the rain stops, we won't be able to play. (Under what conditions will we be able to play?)
Let's go where the food is cheaper. (Where are we going?)
Phrases can be groups of words such as infinitives (an unconjugated verb) or prepositional phrases (words that describe direction, time, or orientation) that answer this same set of questions.
Correct
We left in a hurry. (How did we leave?)
She took a bus to visit her mom. (Why did she take a bus?)

Hate all these essays and research papers, but you made it very exciting to read! I hadn't actually read it well enough and got a B, but no complaints :)

Communication is great! I love all your features that ease the process. Your team must have spent a lot of time to make it work perfectly and it was worth it)