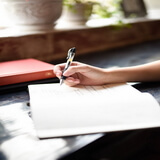 An In-depth Look at Adjectives

May 02, 2013
The eight parts of speech are the building blocks of the English language. Every word we use when we write or speak can be grouped into nouns, pronouns, adjectives, adverbs, articles, conjunctions, prepositions, or verbs, and understanding how each of these groups work is an important part of learning to write well. Here, we're going to take an in-depth look at adjectives.

What is an adjective?

An adjective is a word that modifies a noun (which is a person, place, thing, or idea). Basically, it's a word that tells you something about that noun: it's a way to take a general noun (bed) and make it specific (my old bed). If I say that I've bought "a new, green car," the words new and green give us more information about the noun car. Most adjectives answer one of three questions:
Note: In all the examples given here, the adjective is in italics, and the noun being modified is underlined.

Compared to other parts of speech, the rules for using adjectives are pretty straightforward. With a just a few key guidelines it's easy to make sure that your grammar is correct, but, as with everything in English, there are a few sticking point that can cause trouble for writers.

Where to place adjectives

In English, adjectives are placed immediately before the noun they modify.
Correct
I'm going to wear a red dress to the party.
The blue house is where my friend Rebecca lives.
Incorrect
I'm going to wear a dress red to the party.
The house blue is where my friend Rebecca lives.
The only exception to this is when an adjective is being used with the verb to be or a linking verb like smells or seems. In that case, the adjective follows the verb.
Correct
The wet dog smells terrible.
She is pretty.

When we're using coordinate adjectives, there's a particular order in which we list all our modifiers, which is why it's correct to say the "new, green car" but not "the green, new car." This order is usually second nature to long-time English speakers, but it can be confusing to those learning English because there isn't a real pattern or reason behind it.
So, if you're were buying a car, you'd say "I'm getting a beautiful, huge, new, blue, American, all-steel, pickup truck."

We use degree to compare adjectives, meaning we can show whether a noun is more or less something than another noun. If I say "I'm smarter than my brother," the adjective smart has been modified to show that when you compare the two of us, I'm the one who comes out on top.
Adjectives with only one syllable are modified using the suffixes -er and -est. The first is used when comparing two items, and the second is used when comparing three or more things. Note that the suffixes only go up-that is, you can only use them when one thing is more or greater than the other.
Correct
I'm rich.
He's richer.
She's the richest.
When comparing two things, it's important to remember that you should only use the suffix -er. If you have two daughters, you would say "This is my older daughter," not "This is my oldest daughter."
For words with more than one syllable, degree is indicated by using the words more and most. As with the suffixes above, which one you use depends on how many things you're comparing: more is used to compare two items, and most is used to compare three or more things.
Correct
He's beautiful.
She's more beautiful.
I'm the most beautiful.
Incorrect
He's beautiful.
She's beautifuler.
I'm beautifulest.
Unlike the suffixes -er and -est, with multi-syllable words we can also compare things down-that is, we can show that something is fewer or smaller. To do this, we use the words less and least. Again, less is used when comparing two things, and least is used to compare three or more.
Correct
I'm beautiful.
She's less beautiful.
He's the least beautiful.
Note that the article the is used with the superlative (the most or least). When comparing two items, the word than is often used.
Correct
She is more intelligent than he is.
My brother is less intelligent than I am.
The only exception to this is when the multi-syllable word ends in the letter y. In that case, the y is dropped and the -er and -est suffixes are used.
Correct
I'm happy.
She's happier.
He's happiest.
When using comparative adjectives, it's important to be careful about modifying words that can't be modified. Many adjectives imply an absolute state, which means the noun either is or isn't that thing; it can't be sort of or kind of that thing. For example, a woman can either be pregnant or not; one woman can't be more or less pregnant than another. Often in casual conversation modifiers are used with these sorts of words as a kind of shorthand (for instance, if you say something is "very pregnant," it usually means that she is obviously pregnant or far along). However, in academic writing you want to avoid this kind of casual constructions.
Other adjectives that should be given a degree include:

Sometimes entire clause can act as an adjective. These clauses will be dependent (meaning they can't stand alone as their own sentence), and they answer the same question as regular adjectives (Which one? What kind? How many?).
Correct
The player who scores the most goals will get a trophy.
(The clause who scores the most goals tells us which player.)
The table that we found at the new furniture store was cheap.
(The clause that we found at the new furniture store tells us which table.)
We need a dog that doesn't pee on the floor.
(The clause that doesn't pee on the floor tells us what kind of dog.)
You can spot an adjective clause because they start with relative pronouns (who, whom, whose, that, which) or relative adverbs (when, where, and why). However, other types of clauses, including adverb clauses, can start with some of these words, so in order to be sure it's acting as an adjective you need to identify what it's modifying.
back to all posts
RECENT POST

I'm still amazed by the fact that my dissertation was written in 9 days! Yup, I'm bad at meeting deadlines, but your writers just did the impossible! I got a B+, and that was a real blessing :D