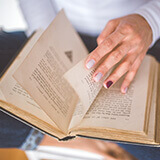 Academic paper: type of work any student should be ready for

Jan 30, 2013
The structure and format of the academic paper is very different from everyday writings; it generally comes with a unique set of characteristics that clearly distinguishes it from others. Some of these characteristics include its initial fulfillment instructions and expectations, argument development, as well as its use of citation procedures for references among other things. So overall an academic paper is one that...

When constructing an academic paper on the college level, often times you'll find that the most frequently mentioned quality that separates it from high school writing or simply more general writing is the strength and merit of its argument. Many professors concentrate on the efficiency of student arguments so much that its very likely that you will see improvements in this area as you progress in your studies. To prepare yourself for performing well its best to become accustomed to the core qualities of a sound argument; which is highly desired by most instructors and educational institutions.

To begin, what is an argument?

In an essay or other writing an argument is basically the author's main statement, claim or position on a particular concept or idea. It is also something that he or she works to prove and support throughout the writing. In order to properly accomplish this the statement or claim is also backed up and supported by evidences which are sometimes concisely expressed in a thesis statement.

So what separates a good argument from a bad one?

Due to the culture and nature of college level courses some competencies are just assumed; therefore in some cases students will have to work harder at finding out the information they need on their own as well as how best to draft and organize their paper. High school teachers are usually not only more accessible (because students probably see them five days a week) but they also tend to be more specific in their request and assignments as well as frequently providing students with helpful worksheets and graphic organizers to guide them along in the writing process.
Seeing as though some of these 'guiding' components are usually absent from higher education classrooms (though not always) students may have to work much harder at finding out exactly how to approach an assignment and the necessary research that must be performed for it. Likewise, in some situations asking the professor more detailed questions about the assignment can definitely give you a clearer picture as to his expectations, in some cases he may really be expecting you to 'fill in the blanks' with your own interpretations, methods, and ideas. So with this he or no one else can really tell you how your final product will be.

Another important area to prepare yourself for is the tedious work of citing your references for academic papers. Depending on your high school English teacher or job-related experience prior to college, you may already be accustomed to styling guides such as MLA and APA. Properly identifying and citing the owner of a particular statement, thought, or idea is highly regarded in scholarly and academic institutions. Therefore part of your preparation for publishing academic works would be to properly acquaint yourself with the many styling guides that are available and frequently utilized in academic circles. They include the ones mentioned above as well as others such as Chicago and Turabian styling guides and ACS (for scientific papers) and ASA (for sociology).

In addition to these three key characteristics mentioned, other important details about the academic paper versus other papers is that it often requires more analysis than summary and a thesis statement over a topic sentence. In more basic writing assignments a lot of summary and paraphrasing may be required of the student where they are responsible for relaying facts and recalling important information. College writing generally requires very little of this and in most cases will demand that the student spend quite a bit of time analyzing and interpreting the information or data presented to them (generally the summary portion of a paper may be one or two paragraphs where the analysis can be several pages).
Lastly the issue of the thesis statement is also an important one to discuss. Mainly when referring to high school or other general writings, a topic sentence will usually suffice for detailing what will be addressed in the paper as well as the intent of the author. Comparatively, with academic writing its not enough to state the topic and intent but its also expected to turn that information into a formal declaration of purpose in which the author explains what he or she will argue or prove within the confines of the paper (including any relevant sub points or issues connected to it).
back to all posts
RECENT POST

I completely forgot about the essay, and this service became my lifeline! Received my essay in time and it looked so good like as if I worked on it for weeks! You are the real pros, guys!

I like your services and don't regret getting my papers done here. I don't need a lot of help but since I'm a working student I don't have enough time for all my papers. I always order in advance so the deadline extension was ok with me. Free revision option is great! I am always sure I would get what I wanted.