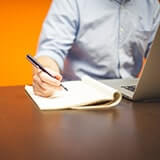 The Three Rules of Writing That Will Liven Up Any Paper

Feb 07, 2013
Academic writing can often seem pretty dull. Especially if you're writing about a topic you don't find particularly interesting, it can be a challenge to make a boring recitation of facts seem interesting. But that paper on Shakespeare or 18th century currency doesn't have to bore your reader, too. If you write well, you can help make that tired paper seem a bit more alive. Below you'll find a few simple writing tricks that will help breathe some life into your paper, no matter how tedious the content.

The whole point of writing is to communicate. Whether you're writing an email or a dissertation, you've got something that you need to tell someone. If you're working on an academic paper, then you're probably trying to communicate your ideas to your teacher and also demonstrate that you understand the material. What, then, is the best way to hold your teacher's attention? Let's step away from academic writing for a second. Imagine that someone is telling you a story about a blind date she went on:
I was worried about going on a blind date. When my date turned up he was pretty cute though. His name was Michael. He came to my house to pick me up and we had dinner at a restaurant. It was one I really like. After we ate dinner, we went to see a band. It was somebody I'd never heard of before.
It's a pretty straightforward story, and if you were listening to it you'd probably be fairly interested. But in writing, it seems a little flat, right? That's because when we're reading, we pay a lot more attention to the individual words. After all, when we're listening to a friend's story we can zone out or pay attention to something else and still catch enough information to be involved in the conversation. When we're reading though, we have to put effort into noticing every word, which means when we're writing, we need to make every word count.
Let's look at the passage above again, only this time it's been rewritten:
I was worried, but my blind date, Michael, turned out to be pretty cute. He picked me up and took me out to dinner at a restaurant I really like, and later we went to see a band that I had never heard of before.
Now our writing is much more concise. By cutting out phrases we didn't need and combining shorter sentences into complex ones, we've managed to tell the same story with a lot fewer words. Now our reader doesn't have to muddle through a long, repetitive paragraph. The same idea can be applied to an academic paper. Your teacher doesn't want to read a long, boring story any more than you do, so work on using fewer words to get your point across.

Now let's imagine another scenario where we're hearing a story. Your friend is telling you about the big basketball tournament he played in over the weekend, and he's recounting the last minute buzzer-beater that won the game. The first version of his story goes something like this:
I was so excited. The game clock is winding down. The crowd is going wild. Just a few seconds before, everyone on my team had been tired, but now we all are anxious to get the final shot. When it goes in, the whole stadium is ecstatic.
Now, let's look at a second version of his story:
I jumped up and down with excitement. The game clock said there was only a few seconds left. The crowd was yelling and stomping their feet. Just a few seconds before, everyone on my team had been drooping from exhaustion, but now everyone ran quickly so we could get the final shot. When it went in, the whole stadium cheered and screamed.
The second one is a lot more exciting, right? That's because your friend got rid of the to be verbs. Also called linking verbs, the words is, am, are, was, and were describe a state of being. They tell you what something is, and they're not very exciting. It's just not all that interesting to hear someone tell you that the crowd is wild or that the team is tired. So, to liven up our story we swap out those linking verbs for action verbs, which, as the name suggests, describe an action. Instead of saying "the crowd is wild," your friend describes what they're actually doing: "The crowd was yelling and stomping their feet." Now you have a picture of the crowd that is exciting and full of activity.
Obviously, when you're writing an academic paper you're probably not going to be telling exciting stories about sports, but the general idea is the same: if you swap out linking verbs for action verbs it will make your writing more exciting. Paint a picture for your reader of characters in novels and historical figures actually doing things, not just sitting around being. Not only will this liven up your paper, but it will also help you actually provide more information for the reader.

The next rule is another subtle way you can get the reader to be more engaged with your work: choose the active voice, not the passive. What's the difference? Let's start with a simple sentence:
I was hit with a hockey stick.
Here we have a pretty basic idea-an action (hitting) has been performed on me. So, we've got a good, lively action here, but, if you look closely, you can see that we're missing a lot of information. This sentence doesn't tell me a lot of about how I was hit with a stick, and most importantly, it doesn't tell me who performed the action. Was it a hockey player? A mugger? My next door neighbor? Sentences with this construction are said to be in the passive voice. There is an object receiving the action, but the person or thing performing the action is unknown. Passive sentences have the form: subject + to be verb + verb.
If we want to rewrite this sentence so that it tells us more information, we need to add in the person who's doing the action of the verb:
My brother hit me with a hockey stick.
Now we know a lot more information, and remember, every piece of information we can pack into a sentence is going to make our paper more exciting. Notice also that the to be verb is gone and the only verb left is a simple action verb. To create the active voice, we add a subject, drop the linking verb, and turn the subject of the passive voice sentence into the object. In other words, "I" was the subject in the passive voice, but in the active voice "I" have turned into a direct object receiving the action performed by my brother. Like dropping to be verbs, switching from passive to active voice will get your readers involved with your writing and keep them informed and engaged.
What's great about these three easy rules is that you don't even have to think about them while you're writing. Instead, it's easy to go back and edit your paper with these guidelines in mind. When you're done writing, read back through your paper and look out for short, repetitive sentences, to be verbs, and passive voice. With a just a few minutes of editing, you can change your paper from tired to exciting.
back to all posts
RECENT POST

And here we are again! Honestly, we should be on a first-name basis at this point, with all the assignments you do for me. And you almost never fail! I say almost because I've asked for a couple of revisions, but no biggie. This time you delivered an awesome term paper to me, so it's definitely a "recommend".

You are awesome! That is all I can tell you. I've used your service before, however this was the first time when I needed my paper be done in several hours. I was really surprised with your speed. A writer managed to complete my paper within the given time frames. Thank you, guys!