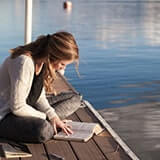 Dec 16, 2012
Writing a paper is a hard task and exhausting at the same time. You need to review all possible topic ideas to find the one that suites you the most. Start searching for relevant sources to support your topic and point of view. Try to always present your ideas clearly: even the best thesis will fall apart if you can't write well. Knowing the set of rules of English grammar is main source to good writing.

A verb describes an action or a state of being; it will tell you what the subject of the sentence is doing. In the sentence,
She opened the door and turned on the lights.
the subject, she, is doing two things: opening and turning. Note that the phrases "the door" and "on the lights" are not part of the verb. Instead, they're phrases that modify or take the action of the verb ("The door" is a direct object; "on the light" is a prepositional phrase.) Nouns that describe an action are known as action verbs.
Verbs that don't describe an action but instead describe a state of being are called linking verbs. In the sentence,
My sister is captain of her soccer team.
the subject, my sister, isn't completing any action. Instead, the linking verb is connects her with the description that comes later in the sentence. In other words, ising isn't something that you can do; it just describes something about you. All forms of to be (be, am, is, are, being, was, were, been) are always linking verbs, as are the verbs to become and to seem. Some verbs, including to feel, to look, to smell, and to appear can be either action or linking verbs. For example, in the sentence,
That pizza smells great.
smells is a linking verbs because the pizza isn't actually doing the smelling. Instead, smells links the subject, pizza, with a description. But in the sentence,
The dog smelled the flowers.
smelled is an action verb because the subject of the sentence, the dog, is performing the action of smelling. Here are a few more examples:
She appeared ready to take the test. (linking)
She appeared at the house without calling first. (action)
I feel like staying home tonight. (linking)
If you feel the sweater, you can tell how soft it is. (action)

Verbs are conjugated to indicate tense, that is, when the action happened. Unconjugated verbs are known as infinitives and have to form to + verb, i.e., to talk, to eat, to be. English has six basic tenses (there are a lot more, but these six will cover most situations).
Simple present: Describes action happening in the present moment (she talks, she eats, she is).
Simple past: Describes an action that was completed in the past and is usually formed by adding -ed to the end of the verb, although there are irregular verbs that have special spellings (she talked, she ate, she was).
Future: Describes something that will happen in the future, and is usually formed by combining will + the verb (she will talk, she will eat, she will be).
Present perfect: Describes actions that happened at an unspecified previous time and is formed by adding has/have + past participle (she has talked, she has eaten, she has been).
Past perfect: Describes action that happened before a separate action in the past and is formed by adding had + past participle (she had talked, she had eaten, she had been). For example, the use of past perfect in the sentence "We wanted to share the cake but she had eaten it all," shows that the action "she had eaten" occurred further in the past then the action "we wanted."
Future perfect: Describes an action that occurs before another action in the future or an action that will happen at a specific time in the future. It's formed by adding will have + past particle (she will have talked, she will have eaten, she will have been). For example, using the future perfect in the sentence "She will have eaten all the cake before we arrive," shows that the action "she will have eaten" will take place in the future before "we arrive."

Like adjectives, adverbs are modifiers. But while adjectives modify nouns, adverbs modify verbs along with any other part of speech that isn't an noun, such as adjectives, prepositions, and even other adverbs. They answer the questions how, when, where, and why. In the sentence,
She left the party quickly, and happily drove home.
quickly modifies the verb left (how did he leave?) and happily modifies the verb drove (how did she drive?). In the sentence,
We eat pizza for dinner frequently.
frequently is an adverb that modifies eat (when do we eat?). In the sentence,
The kitchen was very green, but it would be quite expensive to repaint.
the adverb very modifies the adjective green (how green was it?), and the adverb quite modifies the adjective expensive (how expensive was it?).
Adverbs are usually formed by adding -ly to the end of adjectives. For example, the adjective slow becomes the adverb slowly, and the adjective loud become loudly:
We saw a slow turtle.
The turtle moved slowly.
Adjectives that end in -ic are turned into adverbs by adding -ally. For example, the adverb poetic becomes the adverb poetically. Other adverbs have irregular forms, for example very, quite, often, never, and well. Some words, known as flat adverbs, keep the same form whether they're adjectives or adverbs. These include close, deep, fast, and right. For example,
I am often unsure what to wear, but I knew the deep red dress was perfect.
When adverbs modify adjectives, they should come immediately before the word they modify, as in the example above.
There are few hard and fast rules for the placement of adverbs that modify verbs. In general, they can be placed before, after, or in the middle of verb phrases. For example, all three of these sentences are technically correct:
We are currently waiting on the test results.
Currently, we are waiting on the test results.
We currently are waiting on the test results.
Often the best way to judge if a sentence is well-written is just to read it out loud to see if it sounds correct.
Intransitive verbs (verbs that don't take an object), however, should immediately precede adverbs:
The girl talked loudly.

Prepositions are words that describe a spatial or temporal relationship (i.e., they describe how things are related to each other in space or time). Words like before, after, on, and throughout explain how things are organized in time, while words like under, with, at, and outside explain where something is:
We're going to have class outside.
We should eat dinner before we go to the concert.
We will be meeting at 7:00 p.m.
Nouns can be combined with prepositions to create prepositional phrases. For example, around the house, under the sea, and throughout the day.
Prepositions modify verbs, nouns, adverb, or adjectives:
We planted the roses in the shade.
(in the shade modifies the verb planted: where did we plant?)
She picture hung on the wall in the kitchen.
(in the kitchen modifies the noun wall: where is the wall?)
The girl felt happy with her gift.
(with her gift modifies the adjective happy: how was she happy?)

To be honest, I'm pretty tired of writing about all those symbols, characters, and images in the novels. So, glad to have found your service! Your writers know how to prepare a perfect essay in two shakes ;) Thanks for fast delivery!

Having such a great service to rely on is amazing! Instead of spending sleepless nights on writing, I can enjoy the freedom and still get through the semester! I never worry cuz I know that your writers will revise the paper if needed.