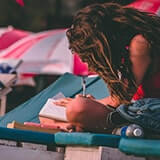 Parts of Speech: Part I

Dec 07, 2012
We all know that a lot of work goes into writing a paper. You need to pick a topic, do research, and organize your ideas, and that's before you even start writing. But all that work won't matter if you can't write in a way that presents your ideas clearly: even the best thesis will fall apart if you can't write well. That's why, even though it might not seem that important, knowing the rules of grammar is one of the keys to good writing, and grammar starts with the parts of speech. If writing a paper is like building a house, then the parts of speech are the bricks, boards, and tiles: you can't build a paper without them.

A noun, at is simplest, is just a thing. Think of something you can touch or see - it can be a person, place, or an object. For example, in the sentence:
The boy ate a cookie in his kitchen.
boy (person), kitchen (place), and cookie (object) are all nouns. These types of words are known as concrete nouns because they refer to concrete objects. All nouns don't have to be concrete, though. Nouns that describe concepts, ideas, or feelings are called abstract nouns. In the sentence:
Her excitement was obvious.
excitement is an abstract noun. Other abstract nouns are words like love, hope, anger, and honesty.
All the above examples are common nouns - nouns that don't refer to a specific person, place, or thing. The boy could be anybody; the cookie could be any kind of cookie. Nouns that refer to a particular object or person are known as proper nouns, and they are always capitalized. For example,
The girl rang the bell, and Sarah opened the door.
Girl is not capitalized because it's a noun that does not refer to any specific person, but Sarah is capitalized because she is a singular person. Other examples of proper nouns include countries (America, India), companies (Microsoft, Toyota), and published texts (The Great Gatsby, the Bill of Rights). Some nouns can be proper or common, depending on how you use them. For example, in the sentence
She lives on the main street in town.
main street is a common noun because it doesn't refer to the name of a particular street. But if you write
She lives in town on Main Street./div>
then you're specifying the name of the particular street (Main Street) that she lives on.

Adjectives are words that modify or describe nouns or pronouns. In general, adjectives answer the questions which (our apartment), what kind (friendly dog), or how many (six cats) and are placed before the noun they modify. In the sentence,
The red car is parked outside the big house.
red and big are adjectives describing car and house, respectively. Both tell the reader which or what kind. Adjectives can also follow to be verbs or linking verbs like feel and seem:
The girl is happy, and her friend feels jealous.